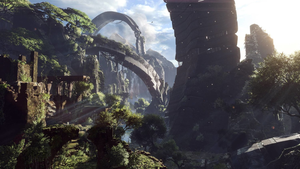 The vast world of Anthem
"... A world that is stuck in the middle of its genesis."
– Mark Darrah[1]

The world of Anthem is the currently unnamed[2] planet on which Anthem takes place. Harnessing the Anthem of Creation, the Shapers set out to create the world in nine days, but vanished after three, leaving only their instruments.[3] The resulting conflict between the instruments of the Gods and the Anthem causes the continuous, violent reshaping of the world. As such, numerous dangers exist across the lands, such as primeval beasts, marauders, and world-altering events.

Humanity has been isolated inside of Fort Tarsis, shielded behind its wall from the dangers of the world beyond. A group of heroes called Freelancers are responsible for leaving the safety of the wall and venturing into the perilous lands beyond, confronting threats seeking to conquer humanity head-on.