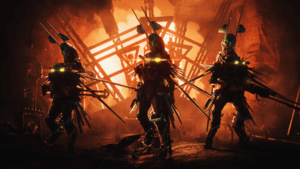 Scars are a non-human enemy force alien to the world of Anthem.[1] They seek out the technology of the Shapers, putting them in direct conflict with the Freelancers; as such, Scars are known to frequently ambush Freelancers while the warriors are on expeditions beyond Fort Tarsis.

The questline where you'll most likely fight them is, with the Sentinal loyalty quests

The Scars are said to have a mysterious connection to the Shapers.[2]