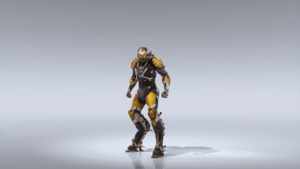 The Ranger is one of the several types of javelins used by Freelancers during their expeditions outside of Fort Tarsis. Considered the most versatile and well-rounded of all the javelins, the Ranger is adequate at fulfilling multiple combat roles with an emphasis on excellent marksmanship and skill mastery. The Ranger is the first javelin available to the Player.

With its focus on precise damage and versatility, the Ranger javelin can suit any number of skill levels. Novice pilots will appreciate the wide array of weapons and abilities they can use to sharpen their skills, while experts will gravitate toward the Ranger’s emphasis on excellent marksmanship and skill mastery. So, whether you’re the newest Freelancer in your group or the most veteran, the Ranger is the gold standard for combat efficiency.

The Ranger is capable of wielding every weapon type except for Heavy Weapons (which can only be used by the Colossus javelin).

Quick to deploy, grenades lay down area damage for effective crowd control at a moment's notice. Modified grenades can be found in the field and equipped to create different effects, including Frost and Seeker Grenades.

The Ranger’s wrist launcher allows for a variety of modules to be loaded on for an extra burst of firepower. This provides a more flexible combat approach that can take down threats quickly.

A skillful field general, the Ranger is capable of creating special fields that allow its allies to gain a tactical advantage; like all Javelin, the Ranger has two different support options.