From Anthem Wiki
(Redirected from Owen)
Jump to: navigation, search

This article is a stub.

It is too short to provide more than rudimentary information about a subject. You can help Anthem Wiki by expanding it.
Please remove this notice once this article has been properly expanded.

This article is a stub. You can help Anthem Wiki by expanding it. 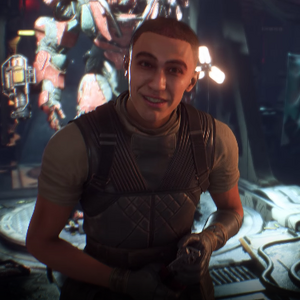 "Life's what you make it. You gotta buy into your own idealism, mate."
– Owen Corley

Owen Corley is a human NPC, cypher, and strider crew member, the latter of which he is the newest member of. He is happy to help The Freelancer where he can, but also desires a javelin of his own.

At the start of the Anthem storyline, he is the Cypher attached to the player's Freelancer. He is often very excitable and talkative during missions.

On several occasions, Owen brings up the idea of becoming a Freelancer himself. However, on his first attempt to fly a Javelin in combat, he seizes up, requiring the player to finish the mission before saving him.

Later when recovering the Javelin of General Tarsis, Owen incapacitates you and your team to take the Javelin for himself. He explains that he does it to protect Fort Tarsis since The Monitor “promised” its safety for the Javelin. While Owens motives are also backed by selfishness for glory of his own Javelin, he leaves the incapacitated freelancers to join the Dominion. [1]