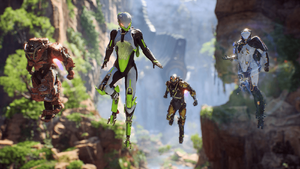 The four initial javelins – the Colossus, Interceptor, Ranger, and Storm, from left to right

Javelins are powered exosuits worn and piloted by Freelancers when venturing into world beyond Fort Tarsis. They grant their wearers superhuman capabilities and are heavily modifiable, allowing for a number of unique individual models.

The general design of javelins is influenced significantly by Shaper technology, and the exosuits are among humanity's most cutting-edge technologies. Javelins are meticulously handcrafted by Arcanists[1] rather than mass-produced, and are subjects of reverence due to their extraordinary nature.[2]

A Ranger-class javelin in flight

Javelins are flight-capable and equally maneuverable underwater, by way of posterior afterburners. Coupled with the exosuits' digitigrade leg design, the afterburners also allow for high-speed movement on ground. Javelin afterburners build up heat while in flight, requiring that pilots fly through water to cool them down for extended flights. Javelin jets can also be cooled in midair while not being used[5] and heat is lost while flying down allowing for longer distance flights downhill. Flying up gains more heat than flying down.[6] Should a javelin overheat while in flight, it will fall from the sky, granting pilots only a modicum of control during the descent.

In addition to flight, each javelin has its own form of double jump, and sprint.[7]

When damaged, javelins retain visible wear and will emit sparks in impaired areas, though they they will not perform worse in such a state. Javelins are susceptible to fall damage and do not possess a health regeneration system; health can be regained via pick-ups found in the world.

All javelins have some form of damage mitigation, [9] with the Ranger, Storm, and Interceptor all having a "dodge" while the Colossus has a personal shield. [10]

Javelins can be equipped with gear found in the world or crafted to better enable Freelancers to tackle the world. Additionally, Freelancers can personalize their javelins with unique cosmetics (armor packs and paint jobs) to distinguish themselves from their allies.[11]